Before Shaughnessy by Kelly Ritter

Before Shaughnessy: basic writing at Yale and Harvard, 1920-1960 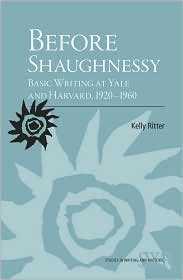 “Imagine, if you will, a first-year program at Equitable University that looks like this: A first-year writing curriculum with a menu of course options for incoming (and transfer) students, each with equal course credit, each with a small course capacity (of twelve to fifteen students), and each with a simple, objective name. One course is called “Writing 1.” The next is called “Writing 2.” The next is called “Writing 3.” Each course is regarded publicly—in all marketing for the institution as well as in communication with prospective students and their parents—as college-level, and incoming students are encouraged to choose, through a process of guided self-placement, which course along the sequence meets their initial needs. No student is called remedial or basic and certainly not precollege.”[i]

In Before Shaughnessy: basic writing at Yale and Harvard, 1920-1960 Kelly Ritter proposes this “broad, utopian vision” [ii] as a replacement for what she states is a disjointed and stigmatized undergraduate writing curriculum; a writing curriculum that unsuccessfully sorts out basic writers and places them in separate, “special” classes. The above model, she asserts, would remove the stigma and rigidity of current basic writing courses and resolve system flaws that have “effectively kept underprepared students at a disadvantage for resources and funding given to other, “regular” students—as these underprepared students represent to legislators an uncomfortable and frustrating result of the always-present weakening of secondary and postsecondary educational outcomes. We need to level the playing field,” Ritter states, “and we need to do so now.” This is her call to action.

She moves from those concepts to present a historical overview and analysis of the basic writing programs of Yale and Harvard during the earlier half of the 1900’s. She uses her analysis of these programs to support these points as well as to provide an new look at what a basic writer has been, is now or could be in the future. Her research shows that basic writers have been found and served at elite institutions in the early part of the 1990’s. This fact complicates the typical view of basic writing, one that begins to take shape after the publication of Shaughnessy’s canonical work.

This well focused handling of a specific topic would be of great interest to administrators, including WPAs and those “above” them and instructors at both the secondary and post secondary institutions. These individuals would find that Ritter’s analysis and call to change provides a rich collection of facts and ideas. These facts and ideas will generate reflection, assessment, and future planning. This holds true regardless of whether the reader agrees, disagrees, or is undecided on Ritter’s ultimate suggestion. Additionally, educators from or historians of elite educational institutions would find her research of the basic writing programs at Yale and Harvard illuminating and fascinating. For these individuals, the text might serve as a starting point for future historical compilation or interpretation. 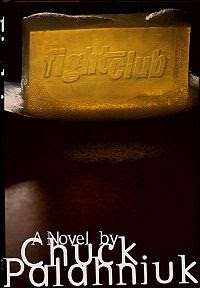 Chuck Palahniuk’s Fight Club is one of those books that people like to talk about, argue over even. I asked five people what Fight Club is “about,” you want to hear what they said?

• 19 year-old male: “consumerism and the destruction of the human spirit.”
• 41-year old female: “good and bad of a person, person confronting their own reality.”
• 49-year-old male: “gay cruising.”
• 21-year-old female: “dude who had insomnia and that was how he fell asleep.”
• 32-year-old male: “what happens when people go to support groups.”

Actually, I asked six. The sixth person, my 16-year-old son. His response, “I don’t know, is there anything to eat? When’s dinner?” Ironic when you consider one of the things people say Fight Club is about is the emasculating effect mothers, who smother their sons by providing too much for them and not allowing them to get tough, have on their sons in post-modern US.

Who’s right, you want to know. What do I think the book is about, you ask. Here’s what it’s about. Whatever you want it to be. Just like that. You read it one way and you get nothing. Because you didn’t try. You didn’t want it bad enough. You read it another way, and it’ll blow your mind.

But making a book like that, a book of possibilities for everyone who wants it bad enough, isn’t easy. There are three things: One, don’t waste time with fancy narration. Talk right to the reader. You’re the one I want to talk to right now, so I’m talking to you. See? It’s just you and me. No time-wasting physic distance between us.

Two, even though you’re talking right to the reader, don’t spoon feed. That’s depressing. And it takes away the reader’s chance to fill in the blanks, make the words their own. Check this:

“The second rule about fight club,” Tyler yells, “is you don’t talk about fight club.”
Me I knew my dad for about six years, but I don’t remember anything. My dad, he starts a new family in a new town about every six years. This isn’t so much like a family as it’s like he sets up a franchise.
“What you see at fight club is a generation of men raised by women.”
Tyler standing under the one light in the after-midnight blackness of a basement full of men.(i) 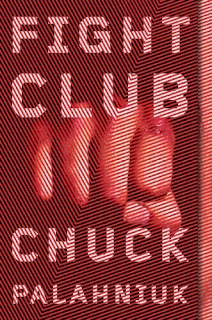 You get what’s going on with Tyler, that’s concrete. You get that something went on with the narrator’s dad, that concrete too. But see how not being concrete about the relationship between the event from the present and the event from the past leaves the thread untied? You feel me. The reader ties them how they want. The reader makes the connection. Not sure it’ll work? Check rule six.

Three, pick one big thing, something key that a lot of people think about, maybe care about, maybe love, maybe hate, and drop it into whatever’s going on in a bunch of different ways. Inconsistent. Juxtaposed. Mix it up. The reader will work it out, make the abstract concrete. Maybe use God.

Bob’s big arms were closed around to hold me inside, and I was squeezed in the dark between Bob’s new sweating tits that hang enormous, the way we think of God’s as big.(ii)

A real doctor grabbed my bare foot and hefted it into the face of the other real doctors. The three turned it and poked it and took Polaroid pictures of the foot, and it was as if the rest of the person, half dressed with God’s gift half-frozen, didn’t exist.(iii)

If you could be either God’s worst enemy or nothing, which would you choose? ... The lower you fall, the higher you fly. The farther you run, the more God wants you back.(iv)

If you’re male, and you’re Christian and living in America, your father is your model for God. And sometimes you find your father in your career.(vi)

Our maybe point your finger right at the stuff in people’s lives: 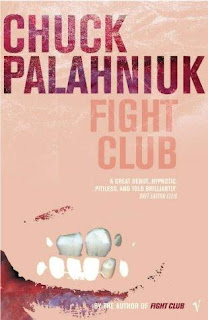 What’s the big deal about stuff, you ask. Why does naming names matter? It isn’t the name that matters, its what the reader thinks about the name. That’s the variable, the thing that makes a concrete object abstract. Listen. What do you think about when I say the word Xanax? That’s not what I’m thinking. Reader’s Digest? We’re not thinking the same thing. See, when you mention a particular thing, something so specific that the reader has experience with it and that experience means the reader attaches some idea or belief to it, you don’t get a specific response—you get a custom made one. Custom made by the reader.

See rule five. It’s all real. Readers know what they know. It’s their truth and their truth is what matters to them.

See rule six. Reader will decide what that truth means and—because rule six, like all the others, can’t be broken—whatever the reader decides the meaning is, that’s what it is.
And since you are the writer—who writes the words—not the reader—who reads them—you don’t get to interfere with the truth. It won’t be tolerated.