The Motif of “Hats” in Madame Bovary

Welcome back guest blogger Carol Owens Campbell. Carol is an MFA student studying fiction at Pine Manor College's Solstice in Creative Writing program. Her current work in progress explores the turbulent echos of the Kent State Massacre as seen through the eyes of a young college student.

In this second of two parts, Carol continues her exploration of hats in Flaubert's Madame Bovary.


***
Flaubert’s motif of ‘hats’ in Madame Bovary contributes to a nonjudgmental theme resonating throughout the novel that “Each of us is different.” As a symbol of this truth, Flaubert describes a variety of ‘hats.’ He also describes a variety of individuals who populate his novel, each symbolized by the ‘hat’ each wears, i.e., an adulterous woman in veils, a group of nuns in hoods, an ethical husband in a leather hat, two men who seduce a married woman, one man in a jaunty straw hat and another bareheaded, a druggist in a skullcap, a young daughter in a bonnet. The image of each ‘hat’ contributes to the difference between each character’s profession, age, personality or behavior.

Flaubert’s motif of ‘hats’ also contributes a curious challenge to a theme of “There’s a Heart vs. Head dilemma when it comes to love.” In the debate between heart vs. head, the “head” represents a person’s logic when it comes to “love” that leads to vows, boundaries, and the propriety of courtship and marriage. The “heart” represents uncontrollable, delirious passion. Flaubert’s motif of ‘hats’ pays homage to both sides of the argument of “heart/passion” versus “head/logic” for his novel addresses passion fulfilled and logic ignored. His novel is also a cautionary tale for both sides.

One of the functions of a ‘hat’ is to cover one’s head. Therefore, if one’s head is covered literally in the heart vs. head dichotomy, the heart, unfettered by logic, would win the contest. Follow one’s heart would lead to freedom to do whatever one’s “heart” led one to do. After all, “logic” would be covered up and one’s passion could flourish without boundaries. 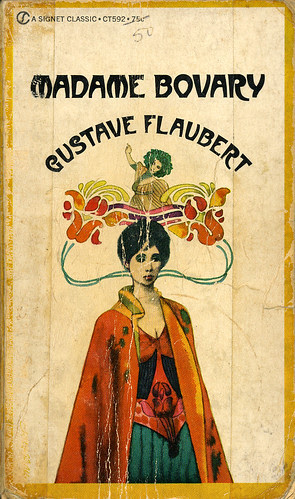 If, on the other hand, one’s head is literally not covered allowing logic to figuratively prevail, then individuals would be more circumspect in their choice of a mate and more thoughtful in their loving relationships.

Flaubert’s deliberate positioning of ‘hats’ in his narrative as well as his deliberate choice not to mention ‘hats’ at all for twelve pages in the middle of the novel ultimately serve to diffuse the “heart vs. head” argument. He does this by allowing those wearing ‘hats’ to feel passion and champion logic and the lovers who are bareheaded for twelve pages (125-137) to give in to their passion while the logic of consequences prevails in their knowledge. Flaubert, in his nonjudgmental way, acknowledges that passion and logic both have consequences and it is vital to a thriving love for both passion and logic to be integral parts working in harmony.


Flaubert gave them the opportunity to know this. Yet even though Emma was a doctor’s wife and Charles was a doctor, neither of them understood that one’s “heart” and one’s “head” are not just parts of one’s body operating separately. Instead they are integral parts of one’s body and soul, both vital to a thriving love of logic and passion working in harmony together.
Posted by Melissa Ford Lucken at 8:06 AM 1 comment:

‘Hats’ as a motif in Flaubert's Madame Bovary...Effective?

Welcome guest blogger Carol Owens Campbell. Carol is an MFA student studying fiction at Pine Manor College's Solstice in Creative Writing program. Her current work in progress explores the turbulent echos of the Kent State Massacre as seen through the eyes of a young college student.

In this first of two parts, Carol explores hats as a motif in Flaubert's Madame Bovary.

A “hat,” i.e., cap, hat, hood, or veil, is a recurrent image in Madame Bovary There are ninety-seven descriptions of ‘hats’ and over a hundred mentions of ‘hats’ in the 247 page novel. Examples include: “We were in the habit of throwing our caps on the ground so as to have our hands more free” (1); “It was one of those head-gears of composite order, in which we can find traces of the bearskin, shako, billycock hat, sealskin cap, and cotton nightcap; one of those poor things, in fine, whose dumb ugliness has depths of expression, like an imbecile’s face.” (1, 2); “He trampled on horses’ dung with them, one hand in the pocket of his jacket and his straw hat on one side.” (97)
Flaubert further highlights the importance of ‘hats’ in his story by noting their absence. There are more than a dozen mentions of characters whose heads are not covered by a ‘hat,’ i.e., a bald head or unfettered, flowing hair or strands of hair. Examples include: “little bareheaded children” (43), “He read aloud, bareheaded, sitting on a footstool of dry sticks;” (87), “in his hand was a long tress of black hair.” (247) 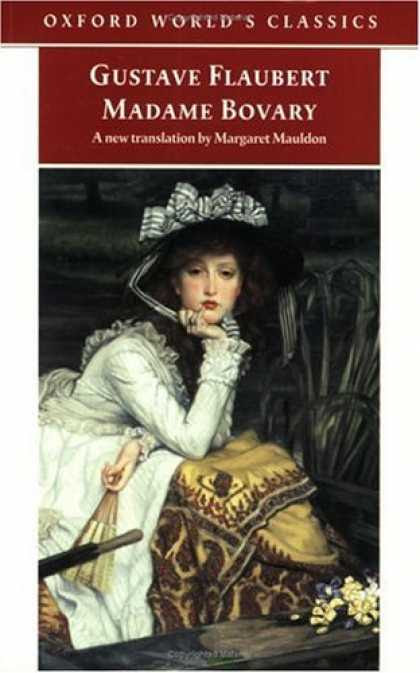 ‘Hats’ qualify as a motif for they are unifying objects throughout the novel. ‘Hats’ also may be elaborated into a general theme.

On the first page of the novel, Charles Bovary’s cap is an essential detail, i.e., “the new fellow was still holding his cap on his knees even after prayers were over.” (1) Bovary’s worry that his cap will be stolen, “casting troubled looks round him,” (2) offers a premonition of the general theme of Bovary’s life, i.e. that he will have a prized possession, his wife’s love and fidelity, stolen from him.

The hat-imagery unifies characters and events in the entire literary work, with the exception of a curious twelve-page absence of the motif (from pages 125 to 137), until the final pages conclude with these passages: “A terrible curiosity seized him. Slowly, with the tips of his fingers, palpitating, he lifted her veil.” (236), and “The women followed in black cloaks with turned-down hoods” (239)

Are ‘Hats’ effective as a motif in Madame Bovary?

The emphasis Flaubert places on ‘hats’ serves a dual purpose. One purpose includes a ‘hat’ in the literal description of a character’s outward appearance, i.e., “He (the druggist) had on a frock-coat, nankeen trousers, beaver shoes, and, for a wonder, a hat with a low crown.” (93) or “The councilor pressing his little cocked hat to his breast repeated his bows” (99).

Another purpose is symbolic. Flaubert crafts a ‘hat’ to symbolize a character’s feelings. In the scene at the masked ball, Emma Bovary is described as follows: “She wore velvet breeches, red stockings, a club wig and three-cornered cocked hat on one side.” (205) Emma’s outfit of breeches and red stockings indicate rebellion, given the mores of the time, however, her “three-cornered cocked hat” points to her feelings of cocky, arrogant, brash confidence to “dance(d) all night to the wild tones of the trombones.” (205) Her feelings of wild abandon are symbolized by the cock of her hat. The irony is that her abandonment by Leon is the catalyst for her behavior that night.

In another scene, Emma and Leon consummate their passion behind curtained windows in a carriage dashing through the countryside and streets of Rouen. As she leaves the carriage, the veil of Emma’s hat symbolizes the curtained windows and the secrecy with which she feels she must keep her love affair with Leon. “At about six o’clock the carriage stopped in a back street of the Beauvoisine Quarter, and a woman got out, who walked with her veil down, and without turning her head.” (173)

Earlier, in Leon’s seduction of Emma, he alludes to a dream in which the motif appears. “In an engraver’s shop on the boulevard there is an Italian print of one of the Muses. She is draped in a tunic, and she is looking at the moon, with forget-me-nots in her flowing hair. She resembled you a little.” (165) His wish for Emma not to forget him after he moved to Rouen is symbolized in the flowers in the hair of a Muse. 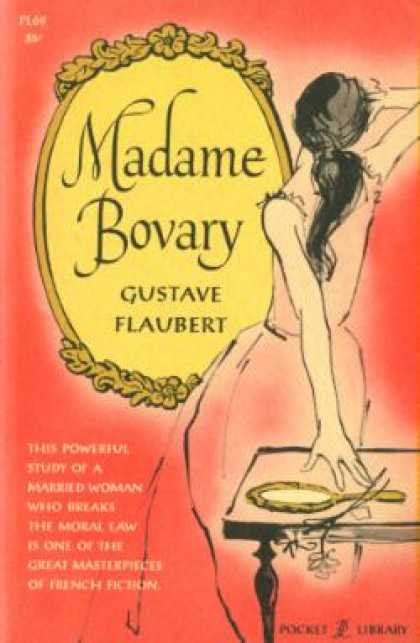 Ultimately, the effectiveness of craft in fiction depends on a reader’s appreciation and understanding of the author’s technique. In the following examples of Flaubert’s choice of a ‘hat’ as a motif to symbolize feelings of characters, I offer my views:

“From that moment her (Emma’s) existence was but one long tissue of lies, in which she enveloped her love as in veils to hide it.” (191) The choice of a veil is a perfect image to me. Not only does a veil evoke a soft covering of netting or fabric to conceal one’s face, it also evokes a wedding veil and a nun’s headdress, alluding to vows Emma once cherished. Now she cherishes Leon’s love and needs to protect it. Flaubert’s motif of multiple veils hiding her lies also evokes the image of lying, when layers of untruths build and multiply.

“She would have liked to be once more lost in the long line of white veils, marked off here and there by the stiff black hoods of the good sisters bending over their prie-Dieu.” (78) The choice to insert “white veils” into Emma’s memories is effective as it literally recalls her days in the convent. However, it also symbolizes her wish for childhood days of innocence, a universal feeling to which most adult readers can relate, and the memory of “good sisters” in “stiff black hoods” that offer her solace as well.

“You were downstairs in the anteroom, ready to go out, standing on the last stair; you were wearing a bonnet with small blue flowers;” (166) In this passage, Leon proves to Emma that she is an “incomprehensible force that took captive my life” (166). His devotion to detail in his description of Emma’s bonnet symbolizes his devotion to her. His attention to her, his memory of her to the most exacting degree, his vision of her months before still remembered as if frozen in time, evokes his charm, his youth, his besotted feelings, his passion. Flaubert exposes the power of how “paying attention” to another person is not only flattering but also seductive.

Another example of Flaubert’s insight into the effectiveness of his ‘hat’ motif can be found in the introductory scene of the book. Bovary’s cap is so unusual (2), it symbolizes how different Charles Bovary is from the other students. The effect of Charles Bovary’s oddity evokes my concern for him as a sympathetic character. The ‘hat’ motif not only heightens my feelings of tension, it also compels me to pay attention to the behavior and choices of this young, vulnerable boy.
﻿
Posted by Melissa Ford Lucken at 7:57 AM No comments: