By
Roberta M. Gubbins
from the Ingham County Legal News
For two days,
Ingham County, Michigan was in Texas as evidenced by the state flag of Texas flown from the flagpole in front of the courthouse in Mason, the freshly planted white, yellow, and blue flowers at the base of the flagpole, reflecting the white and blue of the Texan flag, and the Texas seal hanging prominently in the third floor courtroom of the courthouse.

time was at a standstill in Mason, the courthouse clock stopped at 7:15 so that the bells marking the half hour and the hour would not chime at the wrong moment.
the citizens of Mason and outlying communities gathered on the streets around the courthouse square watching cameras on booms recording scenes, huge cherry pickers moving large shades, directors directing, actors moving about incomprehensibly, all the    while hoping and anxiously waiting to see Hugh Jackman.
For two days, July 1st  and 2nd, Dream Works and Walt Disney Studios Motion Pictures brought excitement and entertainment to Mason, filming Real Steel, a science fiction movie staring Jackman as Charlie Kenton, a washed-up fighter who lost his chance at a title when 2000-pound, 8-foot-tall steel robots took over the ring. 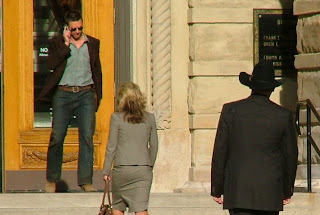 Jackman, known for his role as Wolverine, rumored set for a sequel in 2012, rewarded those waiting, coming over to shake hands and give autographs. He thanked one such crowd, asked by the crew to stop talking during an outdoor shoot, for being “so quiet” while he was rehearsing the scene.
The community was abuzz with comments such as “He said hello to me. I had my picture taken with him, he thanked me for telling him about one of our staffers whose hat he signed and who is fighting cancer, or he shook my hand.” Jackman’s efforts helped ease the communities concerns about the possible disruption caused by the presence of film stars and crew. 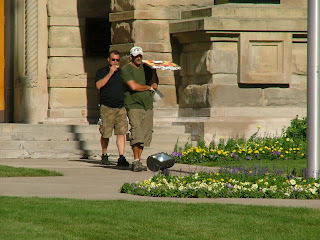 Crewmembers, who were equally friendly, were everywhere, easily identified by their black T-shirts, khaki shorts—earplugs in ear, cell phones or walkie-talkies in hand, clip boards at the ready. They were the folks listed at the end of the movie with unusual names such as gaffer (in charge of electrical), best boy (in charge of any group—term used for both sexes), boom operator who operated the boom microphones, dolly grip, the grip in charge of positioning the dolly, a small truck that rolls along carrying the camera and its operator and the camera loader who operates the clapboard signaling beginning of a shot and is responsible for loading the film.
The courthouse was the beneficiary of some improvements. The windows in the courtroom now have lovely wooden blinds, replacing the plastic variety, and the jury room has a new coat of paint—a deep sage green.
While the offices of the courthouse were open, “the public stayed away,” said Curtis Hertel, Register of Deeds. “I think they thought we were closed.” During filming of the scenes in the courtroom and around the courthouse, public and staff were asked to close doors quietly and speak in soft tones. Everyone was hushed as they went about the business of the court.
On Thursday, work did stop temporarily while a scene in the rotunda was being filmed, complete with fog. “I think the fog was to filter the light coming through the windows at the top of the stairs when Jackman and his lawyer came down from the courtroom,” said Kyle Cobe, Assistant Register of Deeds. “Even though we didn’t have much traffic that day, every item that came in was recorded before the day was out,” she said.
For two days, the citizens of Mason were able to forget about oil spills in the Gulf, spies on American soil, loss of jobs, and foreclosures.
For two days, the citizens of Mason were part of the make-believe and glamorous world of Hollywood, an experience they will share with family, friends, casual acquaintances, and complete strangers willing to listen for years to come.
Posted by Melissa Ford Lucken at 4:37 PM No comments: